Crowded, cramped, horrendous, filthy, deplorable. Animal welfare organizations, including Animal Humane Society, may use these words when describing cases of animal hoarding. Photos support these descriptions, leaving viewers horrified at the conditions in which animals, and often humans, lived.

What those words and photos don’t convey is the fear, anxiety, denial, and delusion that’s almost always at the core of animal hoarding.

The general public might dismiss hoarding as malicious, villainous, even evil — but hoarding is rarely these things. In both law enforcement and the mental health community, there’s growing recognition that we need to approach hoarding cases with more empathy and less judgement. When we acknowledge hoarding as a psychiatric illness, treatment can be more effective and the pattern is less likely to be repeated — which benefits the animals we all care for.

What is animal hoarding and what does it look like?

Animal hoarding is an accumulation of animals that has overwhelmed a person’s ability to provide minimum standards of care. Those standards include nutrition, sanitation, shelter, veterinary care, and socialization.

In severe cases, animals may live in carriers or cages stacked upon one another, kept in their own urine or excrement. Floors, furniture, and counters might also be covered in feces. Animals sometimes have serious illnesses or health issues. They may be overfed and obese or malnourished and emaciated. In the most severe cases, animals are found already deceased.

Cats and dogs are the most common victims in cases of animal hoarding, but rats, reptiles and other critters can be subject to a hoarding environment, too. Hoarding typically begins with just a few, unsterilized animals. Kept in close quarters, breeding can become unmanageable. For example, four cats can multiply quickly, and turn into hundreds over the course of just a few years.

It’s important to note that animal hoarding is not the same thing as intentional breeding. Breeders sell animals for profit and acquire animals for financial gain. Hoarders keep their animals and may feel intense anxiety about giving them away, even if properly caring for them has become impossible.

Each year, humane agents at AHS open an average of 25 animal hoarding cases. In some of these cases, the animals are seized from a property with the help of law enforcement, but most cases result in the voluntary surrender of animals to AHS.

“In either situation, whether animals are surrendered or seized, it’s tough,” says Ashley Pudas, AHS Humane Agent. “There can be an incredible amount of emotion involved.” 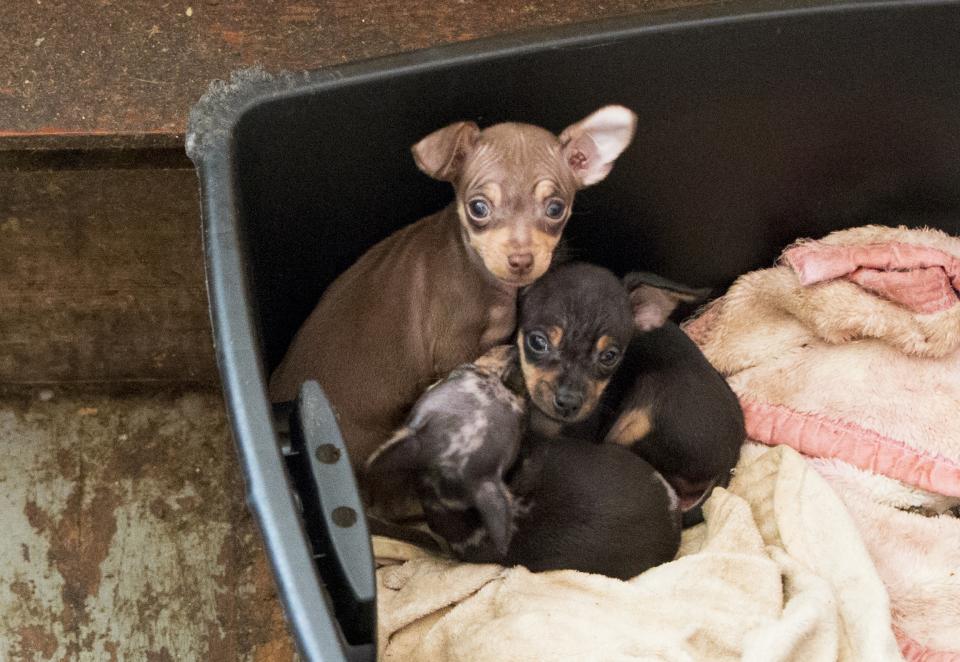 Why do humans hoard animals?

Overwhelmed caregivers have a strong attachment to their animals. They’re often (but not always) socially isolated and sometimes falsely believe their situations are the result of a more recent change in their circumstances, like financial problems or issues with physical health. Caregivers tend to have fewer issues with intervention and appreciate help.

Rescue hoarders believe they’re the only people that can adequately care for their animals. Their hoarding begins with a strong desire to save animals. They also may have an extensive network of enablers, and are in complete denial about the dangerous or unhealthy conditions in which the animals are living.

When it comes to animal hoarding, there are some things we know for certain.

But why people hoard animals isn’t an easy question to answer. Compulsive disorders were once entirely blamed for animal hoarding, but new research points to other complex human conditions. Depression, anxiety, and other forms of mental illness are often at play. A history of trauma and a triggering event may be the difference between three animals living in a dwelling and 33. Genetics also may be a factor. In an early study of hoarding disorder, nearly 85 percent of the participants had a close relative with similar tendencies.

“In my experience, all hoarders feel an overwhelming sense of responsibility to protect their animals from society,” says Ashley, “so removing animals from someone’s home can be an extremely difficult event to get through. It requires a lot of reassurance and patience.”

AHS humane agents play a big role in removing animals from a hoarding situation, but their work doesn’t stop there. Proper intervention is essential to preventing relapse, which happens with 100 percent of hoarders who don’t receive treatment and ongoing support.

Though AHS doesn’t offer direct programs to help hoarders with mental illness, we do focus on assisting hoarders by sharing information about public assistance and community resources, like the Minnesota Hoarding Task Force (MHTF). MHTF is volunteer group that connects hoarders and their family members to therapists, occupational therapists, cleaning services, and more.

As part of long-term intervention, AHS also maintains relationships with hoarders we’ve worked with. Keith Streff, AHS humane agent, has stayed in touch with some for more than a decade.

“Once we’ve become familiar with a known hoarder, we’re partly accountable for making sure it doesn’t happen again,” says Streff. “And most of the time, for us, that just means semi-regular check-ins.”

Within the last decade, severe hoarding emerged as a psychiatric disorder, but according to Louise Kurzeka, a member of MHTF, the public’s recognition of hoarding as a mental illness still has a long way to go. That recognition, she says, is critical to creating more comprehensive, long-term intervention plans.

“The real key in successful intervention is collaboration,” says Louise. “It’s got to be multiple resources coming together to support that individual in that circumstance.”

Only two states in the U.S. (Illinois and Hawaii) explicitly mention animal hoarding in their cruelty statutes. Anti-hoarding legislation has been proposed in several others, but not passed.

In Minnesota, prosecution predicates intervention. Before an individual can be court ordered to seek psychological counseling or held responsible for the financial costs of intervention, the defendant must be convicted of violating an animal welfare law.

"Jail time, fines, and probation may all be acceptable objectives," says Streff, "but the ultimate goal for a hoarding case should be to legally prohibit or limit the hoarder from owning any animals in the future."

How you can help

Owning multiple animals doesn’t mean someone is a hoarder, but if you suspect someone you know is struggling with the ability to provide an increasing number of animals with adequate care, you should: